Mia Summerson, of the The Niagara Gazzette, had written a very nice article about E. Jane Stoddard’s “The Devil is in the Details” Exhibit, in the 04/19/2015 edition.

NORTH TONAWANDA — To look at the intense color and rich detail in the work of Williamsville artist Jane Stoddard, it can be hard to guess that watercolor paints are her medium of choice.

Traditionally, watercolors tend to be applied to paper in a way that creates a loose and translucent effect that can be accomplished quickly. After attempting to mimic that style, Stoddard decided that method wasn’t for her. Originally an oil painter, she uses the technique she developed working in that medium and applied it to her watercolors to create a more detailed image.

“I’ve always painted for my own pleasure,” Stoddard said. “I was an oil painter originally then I ended up taking a watercolor workshop. I thought working with watercolors would be easier, it’s not.”

Stoddard, whose exhibition, “The Devil is in the Details,” opened Saturday at North Tonawanda’s River Art Gallery, said she spends about six weeks to create a painting on average. In order to get the desired opaque effect, resulting in deeper hues, she must apply several layers of paint to each part of the image. 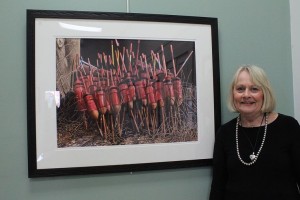 Jane Stoddard poses with his most recent painting “Ladies in Red.” The image, which depicts lobster bouys from Maine, took three months to complete and, according to Stoddard, and was one of her most difficult paintings. Photo by Mia Summerson

“When she first started she tried that loosey goosey style, but it’s just not in her nature,” said Joan Horn, owner of Partners in Art, located next door to River Art Gallery. “She has a different way than other watercolor artists in creating her work. It’s unique unto itself, she has a recognizable style.”

The scenes in her paintings come primarily from time spent on the New England coast, specifically in Maine, and much of the work in her current show feature a nautical theme. Though she hasn’t traveled in some time, Stoddard and her husband are planning a European cruise which will take them from Amsterdam to Budapest, where she hopes to find new images to paint.

“I do all my paintings from original freehand drawings, which I draw from my own photography,” she said. “Hopefully (the cruise) will provide lots of inspiration.”

A longtime regular at art festivals locally and across the Eastern seaboard, Stoddard said she recently decided to quit the festival scene in favor of focusing on her gallery displays.

Her work has left a mark beyond the Western New York. She has received numerous national awards and her work has even been published in Watercolor Magic Artists Magazine. After her show at River Gallery, she will be taking her work to exhibit in Cleveland.

“Her work is wonderful,” said River Gallery manager Cindi O’Mara. “The imagery works well together, the sea, the ocean, the book, the details, it’s great.”

In addition to original paintings, prints of Stoddard’s work are available for purchase at the show. “The Devil is in the Details” runs through June 6 at River Art Gallery, 83 Webster Street. Gallery hours are 11 a.m. to 4 p.m. Wednesday through Saturday.

Copyright (c)2015 Niagara Gazette, Edition 04/19/2015
Original Article: ‘The Devil is in the Details’ at River Art Gallery as artist shows off work