Mia Summerson, of the The Niagara Gazzette, had written a very nice article about Deanna Weinholtz “Northern Reflections” Exhibit, in the 03/11/2015 edition. It was featured on the Front Page!

EXHIBIT: Work of Deanna Weinholtz on display through April 4.

In her youth Deanna Weinholtz spent many summers under the Northern Lights at her family’s resort on Canada’s Kawartha Lakes, and those memories have become the inspiration for much of her work as an artist.

Weinholtz, an acrylic and watercolor painter, has displayed her work in several group exhibits, but her collection “Northern Reflections” is her first solo exhibition. The show opened to a packed reception on Saturday evening at North Tonawanda’s River Art Gallery, 83 Webster St.

“I’ve seen the Northern Lights many times,”she said. “The memory of watching those intense colors from the beach, the atmospheric changes, the color blending the textures, that’s the inspiration.”

Weinholtz first became interested in art as a child, but her life took a different direction when she after she graduated from Buffalo State College with a degree in graphic design. After her children were born, she decided to stay home with them, but she felt the need to keep stretching her artistic muscles and took up bridal dress design.

Still, there was something missing, she said. It was then that she realized she wanted to get back to her roots; painting.

“It hit me like a ton of bricks,” she said. “So I started taking workshops and one of them got me into abstract painting. It got me thinking on a whole different avenue.”

The result is a collection of work inspired by various aspects of nature including mountains, waterfalls, wildfires and, of course, the Northern Lights. Her current exhibition is composed primarily of acrylic and oil paints, but Weinholtz said she’s been experimenting with a variety of different sculpting pastes which add an extra dimension of texture and a sort of 3D effect to some of her paintings. 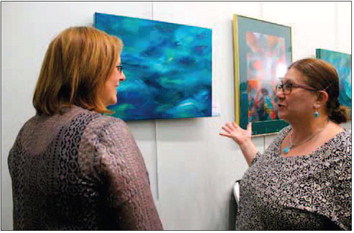 While Weinholtz sometimes paints from photos, she often paints from memory or combines the two components. One watercolor painting on display at her show was inspired by a photo sent to her by a friend living in a neighborhood in Colorado that barely missed being hit by a wildfire. Weinholtz combined the image with the view of the shore seen from her family’s Canadian resort.

“I knew I had to paint it,” she said. “There was the most glorious sunset behind the plume of smoke rising above the homes. What she went though, in all the disaster, she still saw the beauty in it.”

The painting, titled “Holding Hope – Colorado Wildfires,” won an honorable mention at 2014 National Exhibition for the Niagara Frontier Watercolor Society. For several years Weinholtz, who is a resident artist at River Art Gallery, has been encouraged by gallery owner Lisa Langer and gallery manager Cindi O’Mara to host an exhibition there. Weinholtz saidthe experience has taught her a lot of about how to set up an art show and helped her to learn more about herself as an artist.

“She’s so energetic,” O’Mara said. “She did a demonstration during Canal Fest and you could see that she was just so into it. You can see how passionate she is.”

Langer said that she loves Weinholtz’s abstract style because it gives the viewer a chance to go beyond the “realm of reality.” She also said that Weinholtz has had the entire directory of resident artists at the gallery to help develop her style and technique and to give her another source of inspiration.

“This is her visual language,” Langer said. “(Weinholtz) adds so much to the collection of artists we have here.”